Continuing with the April A-Z Challenge, I’m posting six days a week, following the letters of the alphabet. I will share all the movies, books and games I watched, read and played--all the influences that turned me into the geeky person and writer I am today. 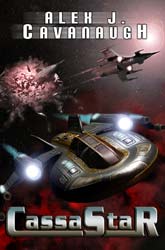 Choose Your Own Adventure, most popular in the 1980s and 1990s and aimed at the 10-14 year olds. The reader ‘becomes’ the protagonist and gets to choose the course of the story. I read these in my 20s and ever since I’ve harboured a secret desire to write one someday.

CassaStar by Alex J Cavanaugh (2010). This book satisfies the inner geek. I love the characters and in particular the story about friendship. Even non-geeks would love this.

GAMES
Castle Wolfenstein (1981) This was a tacky action-adventure shooter game set in World War II. I didn’t play this one in its day. I only discovered it much later once it had fallen into the category of retro fun.

The Insecure Writers’ Support Group
I recently attended a Speculative Fiction Writers’ Festival and Garth Nix, a successful Australian author of young adult fantasy novels, sat on a number of panels. His greatest emphasis was write what you love and believe in what you write. This sounds simple enough, but it’s also something new writers tend to forget in the pursuit of publication. Thanks, Garth, for the reminder!

What are some other ‘C’ movies, books, games or activities you loved? What’s some of the greatest advice (writing or otherwise) you’ve ever heard?