Stephen Tremp: On Re-Editing and Cats

If you are looking for my IWSG post, you can find it here: 5 Steps to Deal with Writer's Block because today I've handed my blog over to Stephen Tremp, intrepid writer extraordinaire.We've been blogging buddies for many years now and he's always inspired me with his can-do attitude. Take it away, Stephen:

My family of kids has just grown to four. That’s a pretty good size family. Sure, my focus is on my new baby Salem’s Daughters. She just entered the world and I’m busy oohing and ahhing over her.

But I do have other kids. Three as a matter-of-fact. And as much as I love my newborn, I can’t neglect the rest of the family.

So I’m re-editing the Breakthrough series in preparation to release as a box set.

My first book Breakthrough has been a real problem child as I had to do a lot of editing and bring the book up to date. Since I use real establishments and some have closed down, I needed to replace them with new restaurants and resorts and such. It’s amazing at just how fast that book became dated because of various references to people, places, and things. And there were a lot of typos and such to correct.

Opening took a lot of tweaking but not as much as Breakthrough. Escalation was in much better shape, but I had quite a bit of experience under my belt by the time I wrote that.

Oh, and I have Salem’s Daughters discounted this week to $0.99 because of Halloween.

Fun Facts Cats can be allergic to you. According to a 2005 Study feline asthma—which affects one in 200 cats—is on the rise thanks to human lifestyle. Since cats are more frequently being kept indoors, they’re more susceptible to inflammation of their airways caused by cigarette smoke, dusty houses, human dandruff, pollen and some kinds of cat litters. And in rare cases, humans can even transmit illnesses like the flu to their pets. 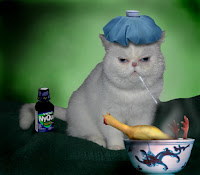 Did You Know Cats have similar illnesses as humans. They are susceptible to more than 250 hereditary disorders, and many of them are similar to diseases that humans get. Felines even have their own form of Alzheimer’s Disease, and, like us, they can get fat—in fact, 55 percent (approximately 47 million) of American cats are overweight or obese.


Have you gone back to re-edit or tweak books you’ve previously published?

Short Blurb: A four hundred year old evil is unleashed when the daughters of those killed during the Salem Witch Trials find a new generation of people to murder at a popular modern-day bed and breakfast.

Stephen Tremp writes Speculative Fiction and embraces science and the supernatural to help explain the universe, our place in it, and write one of a kind thrillers. You can read a full synopsis and download Salem’s Daughters by Clicking Here.


--
Thanks, Stephen. I'm looking forward to reading Salem's Daughters. To everyone, if you haven't already, don't forget to visit me over at the IWSG website: 5 Steps to Deal with Writer's Block. I'd love to see you there.