Well of Ash by Elle Cardy

Dragons, magic, and a mystery that can kill...

OR for a limited time,

get a free copy HERE. 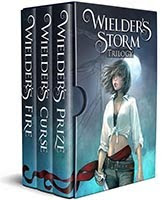 Fire in her soul. Fire in her magic. Fire to defeat the oncoming storm.

Short Story
Between the Ticks by Lynda Young

From AntipodeanSF
Archived online in the National Library of Australia


Cling to God in the chaos of life...


A short piece for anyone looking to refresh their faith.

For a free copy, send me an email.

Writing for Profit
From writing to publishing to marketing, the Insecure Writer's Support Group members provide tips on making money as a writer. This guide represents the spirit of the IWSG - to encourage and support writers everywhere! It is our hope that this book will benefit you as a writer, no matter where you are in the journey.

A guide to publishing and beyond. Over a hundred authors from across the globe have contributed to these pages.

As part of the IWSG team, Lynda R Young edited, collated, and lost sleep to get this book out. She even contributed an article on marketing.

A compilation of letters to our younger selves, sharing the secrets of writing. Over sixty authors around the world contributed to the book, including Lynda R Young

A brief Author Bio:
Lynda R Young is a writer of Young Adult fiction, SciFi, Fantasy and short stories, along with devotional non-fiction. She is also a game developer, 3D animator, 2D artist, editor, photographer, musician, etc. She lives in Brisbane with her sweetheart of a husband who is her rock. You can find her here: Blog, Twitter, Bookbub, Goodreads

A little history:
Being a shy kid, I retreated into other worlds. I often daydreamed, drawing pictures of other places and other people. I created heroes and adventures in my head. Even though I was a slow reader, I plowed through my mum’s collection of Enid Blyton's Famous Five series.

Then I discovered The Hobbit, which led me to Lord of the Rings. I read so many fantastic stories after that. It was inevitable I would turn to writing.

In my teens and 20's I wrote 2 epic length novels. One finished at 219k words (yikes) and the other finished at 130k words. I couldn't get them published, and I'm not surprised. They were naive and unpolished.

For a long time afterwards I expressed my imagination through digital art and 3D animation. Apart from my day job as an animator, I got a number of creations published in Design Graphics Magazine, the Tolkien Society's internationally distributed bulletin, and a few other fantasy magazines in Australia. I even won a few awards along the way.

I am now writing again with as much zeal as I threw into my art. Along with writing fantasy and science fiction short stories, I also have a young adult fantasy series available, starting with Wielder's Prize in paperback and ebook, I have a Christian devotional, Cling to God: A 365 Day Devotional, Available as an ebook, paperback and hardcover.