On Writing Series and a Secret Revealed #IWSG

Today I'm over at Denise Covey's blog talking about my experience writing a series. Please pop on over and check it out.

I will also have a mention on Literary Rambles with the release of Wielder's Fire, the conclusion to my Wielder's Storm trilogy.

And last week I was with the wonderful Diane Burton. If you missed that, then you can check it out here. 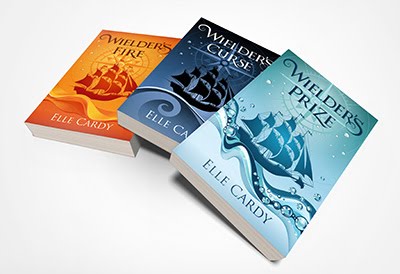 The IWSG question of the month: Writers have secrets! What are one or two of yours, something readers would never know from your work?

While Wielder's Prize is my debut epic fantasy novel, and the Wielder's Storm trilogy is my debut series, they are not the first novels I wrote. I previously wrote (but did not publish) an extensive fantasy series set in the same world about a girl named Galia. She features in the Wielder's Storm series as Gley. All her secrets are revealed in this series. And I hope to publish it this year. However, because I wrote it many years ago, it needs a major rework and tidy up. I can't just throw it out there. I want it to be as good as the Wielder's Storm trilogy, and I'm super excited about it. So, shhh, it's a secret...

What's your secret? What have you been reading or writing lately?

Don't forget to pop on over to Denise's for more on writing a series.

This post was written for the IWSG. Every first Wednesday of the month, members post on their blogs about their writing insecurities or offer some encouragement to others. If you are new to the IWSG or want to learn more, then please go HERE.
Posted by Lynda R Young as Elle Cardy at 11:55 AM 51 comments: