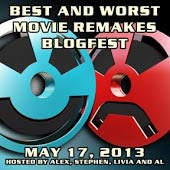 When Hollywood runs out of ideas, they remake older films. Sometimes this works, and sometimes it fails miserably.

There are so many remakes around and yet for the majority of them I prefer the ones I saw first. This doesn’t necessarily mean the original. For example:

This was originally made in 1933 and again in 1976. I saw the 2005 version first and prefer it over the others, even over the 1933 version which was an amazing feat of animation for its time. Truly ground-breaking.

The Italian Job: I saw the 1969 version before I saw the 2003 version. The 1969 movie was hands down the best. Perhaps it was the humour, the cute boxy minis, or the way the original ended.

This would have to be my favourite remake of them all. I’m talking about the 1982 film directed by John Carpenter and with Kurt Russel in the lead. It’s a remake of a 1951 film, The Thing from Another World. Unfortunately the film was remade again in 2011 and it lacked the same scary spark.

This would have to be my least favourite remake. I enjoyed the 1982 B-grade quality of the original. They didn’t take themselves too seriously but they did a good job. I think they tried too hard in the 2011 remake. Or maybe, as I hinted above, it was simply a sense of loyalty for the first one I saw.

Which are your favourite and least favourite remakes?

Thanks to Kriti for the Creative Blogger Award.
Pop on over to her blog, Just a Little Time, and say hi from me.