Meet the Authors of Make Believe 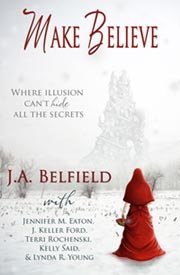 I’ve always been interested in what draws people toward writing and how they got started, so today I’m asking the authors of the Make Believe anthology this very question:  What got you started in writing?

In order of their story appearance in the anthology:

Terri Rochenski
I went to public school starting in 8th grade. Those 'choose your own adventure' stories were all the craze. I read every one the library had to offer and thought, "I can do this!" I wrote three or four which I read to my younger brothers till they fell apart. Then I thought, "I'm going to write a novel". It was a fantasy adventure about a little gnome named Gundi. That was only the beginning of my dreaming. :)

J. Keller Ford
I started writing when I was around five years old but it wasn’t until high school I realized I had potential. My English teachers loved my writing and encouraged me to pursue my talents. Like so many of us, though, I ended up going a different direction and I put my writing aside. Twenty-five years later, I returned to writing. In 2011, I completed the first manuscript in a YA fantasy trilogy. I am currently working on the remaining two, and my short story, The Amulet of Ormisez, was published by J. Taylor Publishing. Other short stories are in the submission stage.

Lynda R. Young
I blame an ear infection. Sounds odd, but it rendered me close to deaf when I was young. For a long time no one suspected because I’d learned to read lips. But I didn’t catch everything, so I stopped trying and retreated into my own little worlds. My mum discovered the problem and I had an operation which fixed my hearing, but by then it was too late. I’d fallen in love with those worlds. Matched with the discovery of the joys of reading, it was inevitable I’d turn to writing.

Kelly Said
I started writing as soon as I learned how to hold a pencil to paper. I would find a quiet space to drift away into my own little world, sketching scenes and scribbling short stories. My mom still has some of those early pieces, hehe! It wasn’t until after I graduated college with a bachelor’s degree in drawing though, that I started letting the words fly, dedicating time to honing my ability to bring my imagination to life. It’s exciting to experience that flash of an idea, to write it out, edit, and rewrite until it’s told just right.

Jennifer M. Eaton
I have been writing ever since the bug hit me in high school, when for some demented reason I decided to write a story for my friends. I ended up writing one chapter a night (under high peer pressure) and 800 or pages later (yeah, ouch) I had my first novel. Well... several novels later I finally decided to try and get something published, and Whalla! Here I am. Before now, writing was more of a pleasure sport for me. I really enjoy the process and the creation of a new world. I am so thrilled to now be able to share one of my stories with the world. It is really an amazing feeling.

J.A. Belfield
What got me into writing is a question I get asked a lot. Whilst I’d love to have some deep and meaningful answer, I just don’t. The truth of the matter is, the reason I started writing was because I had crazy-a$$ed dreams most nights, and even crazier-a$$ed daydreams, and way too much time on my hands due to being a housewife and the kidlets being in school. I mean, there’s only so much housework a bird can do before she starts to get a little stir-crazy, right? So, I sat down one day … and I began to write.

How did you get started in writing?

--
As part of the Make Believe Blog Tour:

I’m over with Kelly Said at her blog for a glimpse into my writing world (scary). I'd love to see you over there. Click here.

I am also over with Jennifer M Eaton so I strapped on those roller skates again. I'd love to see you over there. Click here.

Amazon / Barnes & Noble / Books on Board

Posted by Lynda R Young as Elle Cardy at 5:00 PM