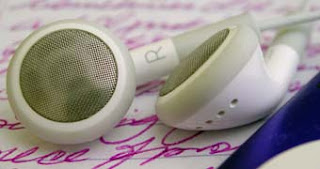 Today I’m taking part in Alex J Cavanaugh’s Top Ten Countdown Music Blogfest. We are supposed to be listing our ten favourite songs of all time, but instead I will be listing the ten songs/albums that I listen to while I write. Below is the music that inspires me.

10. Hallelujah – Rufus Wainwright (from the Shrek Soundtrack). I’ve heard other versions, but I like this one the best. I don’t often listen to music with lyrics while I write but I’ve put a few in this list because of their inspirational value. This one can be a tad distracting, but I love it anyway.

9. Good Monsters – Jars of Clay. This is the only full album I’ve listed with lyrics. This makes great background music for writing because it broadens my imagination and helps to give my stories a life of their own.

8. Braveheart Soundtrack – London Symphony Orchestra. This soundtrack is not distracting and has enough power in the music that it helps me visualise scenes. Also good for sad scenes, particularly the main title.

7. Songs of Sanctuary – by Adiemus. This album is an old one but great for writing because it’s gentle. It has a tribal feel without being distracting.

6. Last of the Mohicans Soundtrack. Again, this makes great background music for writing. I particularly like “The Courier”.

5. Of These, Hope – Peter Gabriel. Amazing piece of music with a great beat and strength to it. I find this highly inspirational for my writing.

4. Bali –by Jalan Jalan. Favourite song on the album is “Lotus”. This album is soft. Great for writing quiet, thoughtful scenes. It also has a Malaysian note which makes me think of a cool breeze through the jungle.

3. Uprising – Muse. One of the few songs with lyrics that I’ll listen to while I write. It has a strong beat which is great for strong, angry or fast scenes.

1. The Dark Knight Soundtrack. This is my current favourite music for writing. In particular I love “Like a Dog Chasing Cars”. It’s powerful, emotive and I see a hundred pictures in the music. I play this to death. I play this for any scene, but it works well for pivotal scenes.

What do you listen to when you write?
Posted by Lynda R Young as Elle Cardy at 8:41 AM