Benefits of Reading Plus Books to Read #IWSG 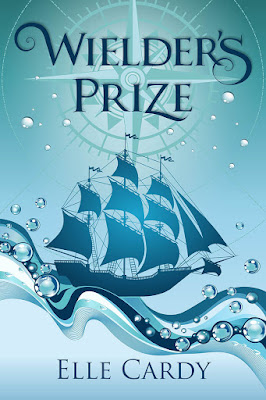 YA Fantasy Adventure set on the high seas.

A tense adventure that will keep you guessing with all of its wicked twists and turns. – Alex J. Cavanaugh, best-selling author

Jasmine’s whole life is a lie. It isn’t until she’s snatched and forced to work on another ship that she learns how much of a lie it has been. Not only can she wield, but she’s a danger to everyone if she can’t control her magic. And worse: there’s another out-of-control wielder out there who wants her dead.

That's the short version. If you want the longer version, check it out on Amazon.

My release date is coming up fast. So super fast!! Less than two weeks! I'm so crazy busy getting ready for it. Wielder's Prize is my debut. If you haven't guessed already, the ebook is currently available for preorder. Get it now, because once it hits the shelves on October 14th the price will go up.

The IWSG Question of the month: It's been said that the benefits of becoming a writer who does not read is that all your ideas are new and original. Everything you do is an extension of yourself, instead of a mixture of you and another author. On the other hand, how can you expect other people to want your writing, if you don't enjoy reading? What are your thoughts?

There are no benefits for a writer not to read. None whatsoever.  You’d be doing yourself a disservice by not reading. You’ll also find that most of your ideas won’t be original because your ideas will still be coming from other inputs in your life: crappy tv, movies, billboards, anywhere you gain any form of input.

There are heaps of benefits for a writer to read. So many!! Below are just a few:

1. Reading activates the brain in a way watching shows can’t. Apart from being good for your mental health, guarding against diseases like Alzheimers, it improves mental flexibility which makes writing so much easier.

2. You can’t learn the craft of writing without reading. There’s only so much a how-to book or podcast can teach you. The real lessons come from reading widely and often. Seeing your craft in action is the best way to see for yourself what works and what doesn’t.

3. Reading teaches you about your market. Reading widely within the genre you write in teaches you what else is out there. What you think is an original idea, you’ll suddenly realise is an old trope that’s been done to death.

4. Reading gives you new ideas. Yes, NEW ones. Every idea under the sun is based on another idea. The more input you get, the more chance you’ll be able to form something new from the old.

5. Reading inspires writers. I’m talking about when we read something awesome, it affirms in our hearts and souls that yes, we do want to keep writing.

6. Reading supports the book industry—the industry you want to be a part of. It’s already struggling because people are turning to other sources of entertainment.

And there are so many more benefits. I could go on and on and on… So read!! Hey, I have a book you might enjoy… ;) And if you don't like YA fantasies, then you might like Damyanti's debut crime novel:
--

Damyanti Biwas
You Beneath Your Skin 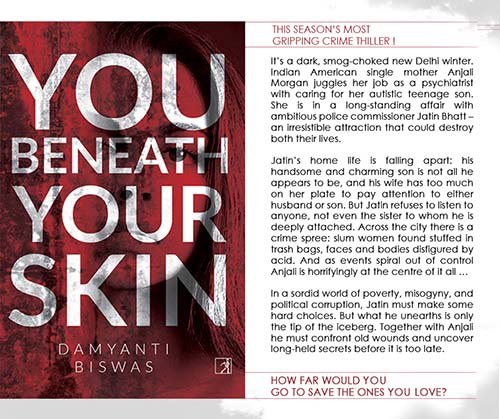 I'm halfway through this book and loving it so far!


This is how it starts:
Anjali Morgan wanted to get hold of Nikhil and smack him. He could have hurt himself jumping out of the moving car.
I told you he’ll be the death of you one day, Mom’s voice played in her ears. You never listen.
‘Get back in the car,’ she yelled at Nikhil, but he’d disappeared, leaving Anjali stranded at the narrow, sloping exit tunnel of the capital’s largest shopping mall. Two drivers honked behind her. She wanted to turn and yell at them but held back. You know better than anyone else he can’t help it.
She needed to clear her head before she spoke to him again. He wouldn’t go far. Deep breaths. She leaned out of the car door and inhaled, only for the petrol fumes to hit her, along with the smog and that dusty smell unique to New Delhi. She forgot it most times, but now she choked on it and coughed.
Anjali stepped out of her car, the yellow overhead lights blinding her for a moment. Five cars now queued up behind hers. The driver in the first car had seen a teenager throw a tantrum in front of his harried mother. He slammed the horn and the rest followed suit. She spotted Nikhil’s gangly form down the slope, cantering away.
‘Madamji.’ A short Nepali guard in a beige uniform hurried up the slope towards her, his whistle shrieking. ‘Yahan parking allowed nahin hai.’
‘I’m sorry.’ Anjali tried to remember the Hindi words, but they’d fled, along with her composure.
‘My son has run away.’
She was about to sprint after Nikhil when the guard overtook her and blocked the way.
‘No parking here.’ He pointed at the cars queuing up behind her. ‘This is “Exit”.’
Down the slope behind the guard, Anjali watched in horror as Nikhil turned into the parking area and disappeared. The cool air of a November evening made her shiver.
‘I need to go get my son. What part of that can’t you understand?’

To keep reading, buy the book. All the author proceeds will go to Project WHY, dedicated to helping underprivileged children, and Stop Acid Attacks, which campaigns for the cause of acid attack survivors. Both are non-profit organizations.

Damyanti Biswas volunteers for the non-profits, Project WHY and Stop Acid Attacks. She speaks passionately on the subjects of gender, violence, and poverty. The narrative of Damyanti’s new novel, You Beneath Your Skin (Simon and Schuster), has been shaped by her years of interaction with women and children in these two organisations. Using a framework of a crime thriller, she conjures in this book an authentic portrayal of poverty, misogyny, and political corruption.