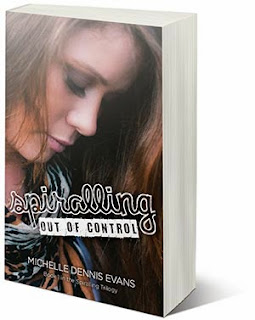 Spiralling Out of Control by Michelle Dennis Evans
Temptation, depression, seduction, betrayal ... Not what Stephanie was expecting at fifteen years of age. Uprooted from her happy, all-girl high school life with a dream filled future and thrown into an unfriendly co-ed school, Stephanie spirals into depression.

When charismatic high school senior, Jason notices her, Stephanie jumps in feet first and willingly puts all her faith and trust in him, a boy she barely knows. Every choice she makes and turn she takes leads her towards a dangerous path. Her best friend is never far away and ready to catch her … but will she push Tabbie too far away when she needs her most? 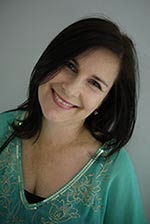 Michelle writes to inspire, take people on a journey and escape their world. She believes you can find healing or hope when you read about someone else’s story – fiction or truth. Michelle is married to an awesome man. She spends most of her days educating, socialising and sporting their four children and her nights writing. Her life is full and at times overflowing but she wouldn’t have it any other way.
http://michelledennisevans.com


Spiralling Out of Control via Amazon


--
My review
Set in Australia, this is a story about a fifteen year old girl named Stephanie who spirals out of control and goes from popular student with so much potential, to a drop out involved with sex and drugs. After moving away from all her friends in Sydney, Steph finds herself bullied at the new school, neglected by her parents, and in desperate need to find a connection with someone, anyone.

I love the occasional use of verse scattered throughout the novel. The poetry sometimes portrayed more raw emotion in its simplicity than the main body of the novel. I got the impression this was because, since the story is written through Steph's point of view, she was more able to express herself through the freedom of verse than she could with her family and friends.

Because I became so deeply invested in the character of Stephanie, the story became increasingly difficult to read as I watched her fall further into her downward spiral. I kept wondering what would make Steph wake up and take control. At each terrible event, I'd think, 'this is it', but she kept making catastrophic decisions and all the adults around her turned a blind eye, or made things worse.

It's a heart wrenching story of how easy it is to fall so far. It's an unsettling read, but one that will stay with me for a long while.
-- 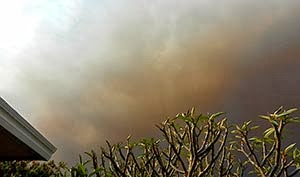 My thoughts and prayers go to all the people affected by the bushfires of New South Wales in the last couple of days. I live in the south of Sydney and took this photo last Thursday from my front balcony, showing the smoke from the fires. Over two hundred homes have been lost. As I type this, there are still fires burning out of control.