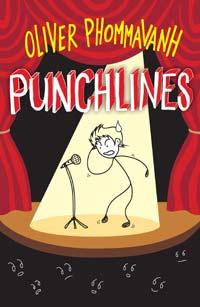 During a writers' festival last year, I heard Oliver Phommavanh, author of two children's novels, speak about how to write comedy. Below are some of his quick tips:

1. Be yourself. The closer to that, the funnier you'll be. So you'll need to inject your personality into your writing.

2. Think of your audience. Ask yourself, what is relevant to your audience, what would they respond to? What might be funny to one group of people may not be as funny to another.

3. Use universal targets. While still thinking of your audience, broaden the appeal by choosing comedy targets that most people will be able to relate to. For example: family, relationships, authority figures.

5. Use sympathy. The readers should feel a certain amount of sympathy for the characters. However, along the same lines as the previous point, there is a fine line where the reader sympathises with the characters, but doesn't feel bad for laughing at them.

6. Base comedy in realism. There needs to be truth in comedy. For example, start with something real and then do the unexpected.

7. Exaggerate the truth. Start with the truth and then exaggerate it. For example, "It was this big…" or "My mum's so cheap that she'd drive across town to save twenty cents."

8. Heighten conflict. The more conflict there is in a story, the more opportunity for an amusing situation. For example, if a character hates long queues, then put them into that situation. The more the character cares, the more likely he'll do something crazy to get out of the situation.

9. Be aware of timing. When writing a joke, make sure the last thing you write is the funniest. Putting the punchline in the middle waters it down.

What are some of the funniest situations you've written or read in a story? Who are your favourite writers who include humour in their work?

Oliver has a new book called Punchlines coming out on March 21st. It's about stand up comedy. Check it out here.

Posted by Lynda R Young as Elle Cardy at 9:45 AM