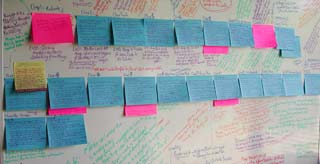 When we think of writers’ tools we think of pens, paper, computer, dictionary, thesaurus, but we have so many possible tools available to us. Today I’ll talk about the humble whiteboard.

I’m a visual person who for a long time earned a living in graphic design and animation. I work best when I can see as a whole the story I’m trying to write. This is where the whiteboard comes in. It’s like storyboarding for animation, only I don’t draw the scenes, I write them up in their basic form.

As you can see in the picture, I also use post-it notes for more detail. The pink ones are major turning points in the story. I also have green ones for character arcs. I’ve written up a timeline in orange pen so I can keep track of passing time in the novel. I’ve also written how each chapter ends in purple. Usually it’s not as full-on as you see in the picture, but I’m nearing the end of the project and I’ve added detail along the way.

I bought a second whiteboard for problem solving and idea generation simply because I like to spread out. I’ve been busy tying up loose ends and working on plausibility so I can leave my readers with a sense of satisfaction at the end of the novel.

In general whiteboards help me think. I could do the same work on a large piece of paper but I like the ease of erasing failed ideas on a whiteboard. I could use digital tools but it’s refreshing to get away from the computer.

What do you use to develop your ideas?

Note: this post is in answer to Carol @ Artzicarol Ramblings who wanted to know how I use my whiteboards.
Posted by Lynda R Young as Elle Cardy at 8:32 AM