Fan Fiction - For or Against? 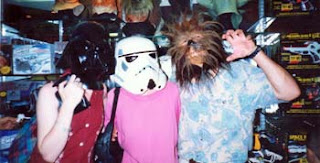 With any popular book or movie, the inevitable result will be spin offs, parodies, wannabes, and fan fiction. Just take a look at Twilight! Fans clamber for more. They lap up the unauthorised biographies, they collect the unauthorised merchandise and they fill the internet with their own stories based on someone else’s world.

Some authors encourage fan fiction. They believe it only helps to spread the word about their own work. They want to nurture their fans so they allow them to indulge in borrowed worlds.

However, some authors are against the whole idea. There is the question of copyright infringement. They believe there is a certain level of theft behind fan fiction. I found in this article the story of Marion Zimmer Bradley:

Most of us laboring in the genres of science fiction and fantasy... had a lesson in the dangers of permitting fan fiction a couple of decades back, courtesy of Marion Zimmer Bradley. MZB had been an author who not only allowed fan fiction based on her Darkover series, but actively encouraged it... even read and critiqued the stories of her fans. All was happiness and joy, until one day she encountered in one such fan story an idea similar to one she was using in her current Darkover novel-in-progress. MZB wrote to the fan, explained the situation, even offered a token payment and an acknowledgement in the book. The fan replied that she wanted full co-authorship of said book, and half the money, or she would sue. MZB scrapped the novel instead, rather than risk a lawsuit.

The article goes on to say there wouldn’t have been any grounds for the lawsuit since MZB had evidence that she came up with the idea on her own. But still it’s something to think about.

What are your thoughts on Fan Fiction? Are you for or against or don’t care either way? How do you think it might impact an author’s work?

* Photo: I'm the stormtrooper in the middle ;)
Posted by Lynda R Young as Elle Cardy at 8:55 AM