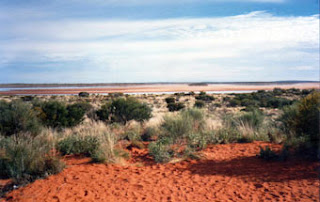 When I was young my dad was a pilot. He wasn't the cool kind of pilot I could brag to my friends about. He wasn't a commercial jet pilot, a fighter pilot, or a stunt pilot. No, he was hobby pilot who flew light aircraft. That meant being crammed into a flimsy 1950's style Cessna that stank of diesel, and the whole plane would shudder when the ancient propellers got started. It meant it took forever to get to a destination. It meant getting stranded at airports in the middle of nowhere while we waited for the weather to change. These airports often consisted of nothing more than broken-down sheds with little for a bored kid to do. It was a real treat if the place had a snooker table. I learnt to play snooker at an extremely early age. I also learnt to be open to new experiences—that took a bit longer.

At one such place, the weather was scorching hot. We were—yet again—stranded somewhere in the outback of Australia while we waited for a storm to pass our destination so we could land when we got there. We drank homemade soft drinks (soda pop) from recycled bottles and played snooker with one of the locals in a tin shack that was missing a wall. The land was vast and dry to the horizon, and the sky stretched out into forever.

I remember having a philosophical discussion with the local as the flies buzzed around in the heat. I would've been no more than seven at the time. I wanted to know how he could know that the red snooker balls he saw were the same colour I could see. For all I knew, I was seeing green, which everyone had labelled red. It took a while to get across my meaning and I don't recall any satisfying answer, but it made me think deep thoughts for the first time as I pondered our individuality and tried to work out my place in the world.

I'm still working that last one out, but I believe the experience became the seed of my writerly mind. Did I appreciate it at the time? Absolutely not! To this day I have an intense dislike for the stench of diesel. But I have some amazing memories I wouldn't have had otherwise—of the people I met, of the places I visited, of landing a plane on a beach because the island my dad wanted to visit didn't have an airport.

Every experience we have is food for our creative muses. Every experience plays a part in moulding us into the people we are today. What are some of your special memories from your early childhood that stand out in your mind?

Photo: I took this photo in the Northern Territory of Australia many years later.