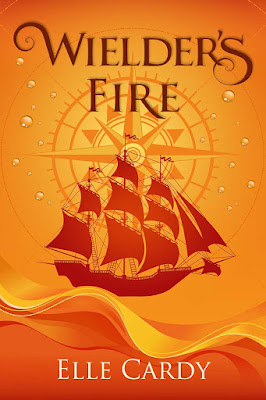 Jasmine’s secrets have been laid bare, her magic stripped. She has nothing left except a fire in her soul to defeat the oncoming storm.

The one who was supposed to love her, stripped her of her magic. Now she’s shipwrecked on a forsaken island with nothing but her anger and determination to keep her warm at night. Alone and defenseless against a powerful enemy, she must find a way to survive.

When she discovers an ancient magic, it helps her escape the island. This power might be dangerous and unstable, but it’s all she’s got against an enemy that can raze townships and summon sea monsters.

Reunited with old friends, Jasmine hunts down this formidable foe. But what hope does she have if she can’t trust those around her, stop the borrowed magic from consuming her, or mend her shattered heart before it breaks her?

Wielder’s Fire is the thrilling conclusion to the sweeping Wielder’s Storm trilogy. For fans of Sarah J. Maas and Leigh Bardugo, who love exciting tales with dark secrets and unexpected twists. Lose yourself today in Elle Cardy’s epic fantasy adventure set on the high seas.

OR, you can read them for FREE on Kindle Unlimited. Check out my affiliate links.

When you sign up for my VIP Club, you'll get exclusive content, along with a free colour map of Erenna, the world I've set my trilogy, Wielder's Storm. You'll also get a special glimpse into my life, and you'll receive the occasional update on book releases, along with other freebies. If that sounds awesome, then click the button below.